Commerce Initiatives
You Are Here: 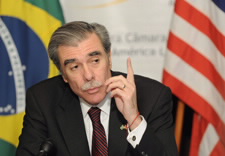 Rio de Janeiro, Brazil (Oct. 9)—Citing the importance of trade and staying open and engaged during challenging economic times, U.S. Commerce Secretary Carlos M. Gutierrez said Brazil has become a powerful symbol of globalization and growth. “With a population of 190 million people and a GDP of more than $1.3 trillion, Brazil is a key player in the world economy and a leader in the Western Hemisphere,” he said. He authored an opinion editorial published in São Paulo’s Gazeta Mercantil Nacional Oct. 10. (Remarks) (Opinion Editorial)

10/9/08
Remarks to the American Chamber of Commerce in Rio de Janeiro, Brazil